I’ve wanted an excuse to cough up for a bottle of Ardbeg Uigeadail since trying this fine whisky on Islay. My recent holiday gave me an excuse and the chance to share it. However, it was not to the taste of my Scottish hosts: the only person who did enjoy it was an ‘incomer’ from Colchester. Go figure! 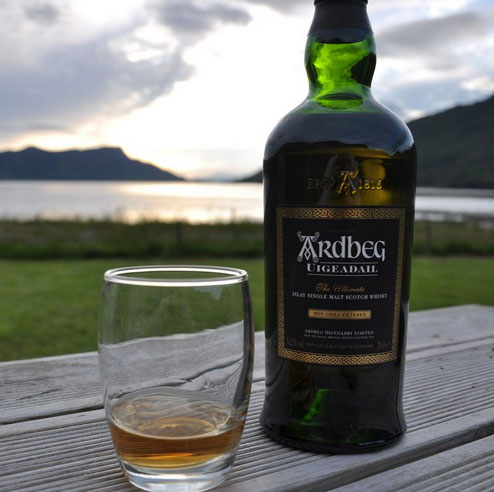 Uigeadail is named after the loch supplying the Ardbeg distillery with that most important whisky commodity… fresh water.

So what’s different about this expression of an Islay favourite? Old sherry casks give this cask-strength smoky number a sweeter twist. Gratifyingly, it’s also darker than the standard ten-year old, which I always think is far too pale for such a rich taste.

On the nose, you know you’re in Ardbeg territory. All those wonderful coastal, salty niffs are accompanied by smoke but mellowed with a sweet, kind of buttery flavour. My tasting friends stuck their conks in the glass and recoiled a bit with an almost chemical nose, but I didn’t find it offensive, more reassuring. Likewise, roll it around in the glass and it’s nice and syrupy, easily taking some water if you’re a bit wary of its cask strength.

The battle of salt sweet and smoke is there in the mouth too. First, things are sweet, which distinguishes this Ardbeg from others I’ve tried. Then you get the smoke, which seems to build gradually rather than smash into your taste buds. It’s a powerful flavour, but not an assault.

There’s plenty of other things going on here too, but they are quite hard for me to distinguish. A complex Ardbeg, definitely, and those with better palettes than mine will real off a number of observations.

The finish is long, again sweet at first but lingering smokiness.

It’s marvellous, actually. Got to be right up there with my other favourites. The only downside is that it’s expensive (£50 plus) so worth keeping for those special occasions: winter evenings in the armchair or, as I did, outside with a wonderful West Coast view.