Times are tough and so is work. So tough, in fact, that gloomy thoughts of the future are hard to shake at the moment.

I needed to go for a walk… to clear my head… to get some air.

The weather was fine and I headed over the Snake to the Derwent Valley.

This is a justifiably popular area of the Peak, a stark counterpoint to the dark cites of the north.

It’s a gratifying landscape of water, woodland and high moorland. The dam walls of the reservoirs are to be admired, too, for their solid engineering and architectural grandeur.

My route was straightforward: I’d follow the sinuous banks of the Derwent reservoir to the Abbey Tip Plantation and head up to the grit stone edges and weather carved ‘pepper pots’ of the moor. This area is well known for its families of rock sculptures, and all manner of ‘anvils’, slab reefs and contorted Dali-esque heads thrust head and shoulders above the peat.

I followed the forest track along Derwent and my mood lightened. The conifer plantations were shimmering reflection in the glassy surface of the reservoir while, up high, a farmer noisily gathered his flocks with a flurry of whistles and cries, alongside intermittent barking from his team of tireless Border Collies.

I skirted the reservoir and took a track east. Bearing right, I climbed steadily along the side of a valley. Crossing the head of the declivity, the high ground came into view. 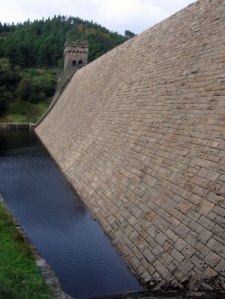 It was later September and an indefinable blue haze hung in the air. The heather was on the turn and the sun, on breaking through banks of cloud, set the ruddy hillsides aflame.

I crossed blank moorland and headed to the clear summit of Lost Lad. My route south and then east lay before me, a clear line of flags joining a series of small rock gardens. The path was deserted.

I pressed on, enjoying wide-ranging views of the Derwent Valley and the bowl of the Vale of Edale in the distance. I traced the classic line from Lose Hill over Mam Tor, along Rushup Edge and round to the mass of Kinder. From this aspect, though, the valley seemed deceptively shallow, a green saucer amid bruised, brown tops.

I had planned to drop down the bridleway to regain the eastern banks of the reservoir, but I had made good progress so pressed on to The Ladybower Inn for a pint of Peak Ales Bakewell Best.

I regained the track with a slight alcoholic fug – not eating enough again – and joined the trail alongside the reservoir after Ashopton. I watched anglers expertly cast their flies from a boat but no fish were rising in their range.

Absorbed by the rhythm of their casting, my Zen was disturbed by two Tornadoes screaming down the valley. I clamped my hands over my ears.

The route back to the Fairholmes café was over all too soon. I dropped down to the reservoir banks and watched the shadows lengthen as evening descended, delaying the journey home for as long as possible.

6 thoughts on “Going up for air”